Labyrinth: An International Journal for Philosophy, Value Theory and Sociocultural Hermeneutics is published since 1999 by the Institute for Axiological Research / Institut für Axiologische Forschungen (Vienna). From 1999 till 2002 it was an on-line journal, thereafter it was published in printed volumes. It is actually both, a printed academic journal, available for purchase, and a Platinum Open Access journal. It is published twice a year, in late Summer and in December.

As a nonpartisan philosophical and interdisciplinary journal Labyrinth is engaged in publication of high-quality peer-reviewed academic articles, critical essays, interviews and book reviews. The Title of the Journal was choosen not just to indicate the research topics of interest, but inindicates the deep interconenection between Philosophy/Theory of Values and Sociocultural Hermeneutics.  Although it is focused on philosophy and on axiology, i.e. on the philosophy and theory of values and their sociocultural contexts, it is also open to related issues in all fields of the humanities and the social sciences with a special emphasis on critical thinking, social controversies and conflict resolution, interfaith dialogue, intercultural and cross-cultural communication, gender studies and managing diversity.

CFP: Gadamer and the Impact of Hermeneutics

Gadamer and the Impact of Hermeneutics

Labyrinth: An International Journal for Philosophy, Value Theory and Sociocultural Hermeneutics is preparing a special issue on the the occasion of the 20th death anniversary of Hans-Georg Gadamer (1900-2002).

Read More Read more about CFP: Gadamer and the Impact of Hermeneutics

Vol. 23 No. 2 (2021): Philosophical Theories of War: Contemporary Challenges and Discussions 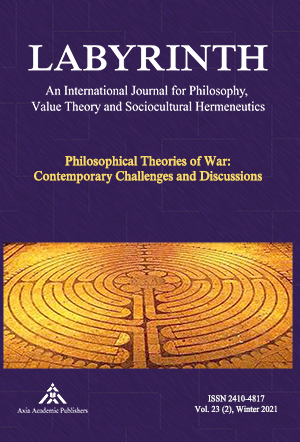